During a tour of Number 10, the new PM shared an interesting titbit from the secret chat.

Allegedly, Her Majesty told him: “I don’t know why anyone would want the job.”

His staff then reportedly chastised him, and said “not to repeat those things so loudly”. 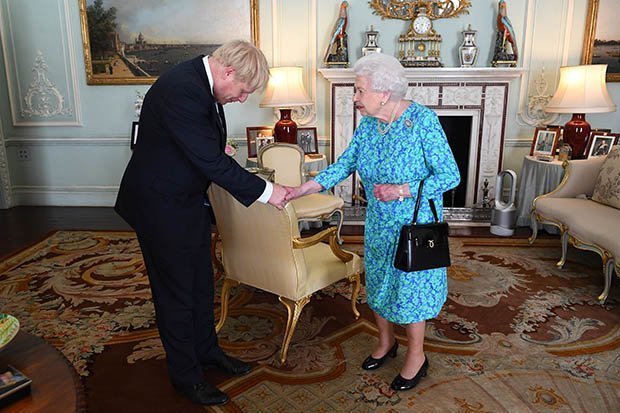 NEW PM: Boris Johnson was formally invited to be the next leader by the Queen (Pic: GETTY)

“I don’t know why anyone would want the job”

Johnson began his first Cabinet meeting this morning after launching a brutal cull of Theresa May’s team to deliver his “no ifs, no buts” Brexit by the Halloween deadline.

Mr Johnson was flanked by Chancellor Sajid Javid on his left and Cabinet Secretary Mark Sedwill to his right.

The new Conservative leader told the room it was “wonderful to see this new team assembled here reflecting, I think, the depth and breadth of talent in our extraordinary party”.

DO OR DIE: Boris with his top man, Sajid ‘The Saj’ Javid, at his first Cabinet meeting (Pic: GETTY)

“As you all know we have a momentous task ahead of us, at a pivotal moment in our country’s history,” he added.

“We are now committed, all of us, to leaving the European Union on October 31 or indeed earlier – no ifs, no buts.

“But we are not going to wait until October 31 to get on with a fantastic new agenda for our country, and that means delivering the priorities of the people.”

And more than half of May’s cabinet resigned or were sacked in a major overhaul of Government.