In Downing Street, she firmly praised those who had stood by her side, including her Cabinet.

She said she wanted a Brexit “that works for the whole United Kingdom”.

But then her voice broke a little as she thanked her husband Philip – stood at her side – for being her “closest companion” and “greatest friend”, as he smiled.

She said she hoped young girls growing up in Britain could see, through her tenure as Prime Minister, that anything was possible for them to achieve. 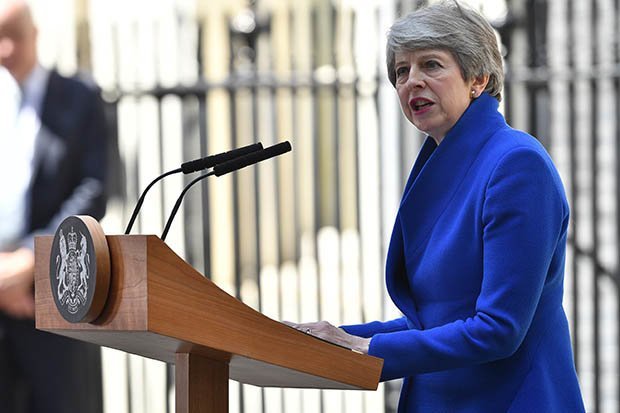 TOUCHING TRIBUTE: Theresa May praised her husband Philip at the tail end of her speech (Pic: GETTY)

“I have just handed in my resignation to @theresa_may. It has been a privilege to serve as her Chancellor of the Exchequer for the last three years”

Since Theresa May’s exit today, a number of cabinet members have resigned, signalling they will not support Boris Johnson and his “do or die” Brexit plan.

Philip Hammond announced his resignation as Chancellor after PMQs.

He tweeted: “I have just handed in my resignation to @theresa_may. It has been a privilege to serve as her Chancellor of the Exchequer for the last three years.”

Earlier, Theresa May said she was “pleased” Boris Johnson will the next PM and dealt Jeremy Corbyn a brutal parting shot in her final Prime Minister’s Questions.

Labour Leader Jeremy Corbyn wished Mrs May “a marginally more relaxing time” as a backbench MP for Maidenhead, but then criticised her leadership and “the reckless plans of her successor”.

In a dig at Mr Corbyn, the Prime Minister paid tribute to his constituency work but said he was at odds with his own party and suggested he think about resigning himself.

She said: “Perhaps I could just finish my exchange with him by saying this: As a party leader who has accepted when her time was up, perhaps the time is now for him to do the same?”

Theresa May will now The Queen at Buckingham Palace to formally resign.

She earlier told Commons: “This morning I had meetings with ministerial colleagues and others.

“Following my duties in this House this afternoon I shall have an audience of Her Majesty the Queen.

“I shall then continue with my duties in this House from the back benches where I will continue to be the member of parliament for Maidenhead.”

FAREWELL: Theresa May will meet The Queen later (Pic: GETTY)

Mrs May’s husband Philip was in the gallery of the House of Commons to watch his wife’s final session, which began at noon today.

Tory MP Bob Blackman, of Harrow East, thanked the Prime Minister for her “loyal service as Prime Minister” as well as her “33 years in public service, which is a record to be proud of”.

He also thanked her for her “personal support” with his private member’s Bill on reducing homelessness onto the statute books.

EXIT: Theresa May’s husband is in the viewing gallery to support her (Pic: REUTERS)

A number of Labour MPs slammed Tories for cheering Theresa May during her last Prime Minister’s Questions, describing it as “hypocritical”.

“Amazing how many Tory MPs are cheering her on when only a few weeks ago they were stabbing her in the back,” tweeted Labour MP Luke Pollard.

Theresa May concluded her 64-minute finale by insisting her “greatest motivation” will be her duty to her Maidenhead constituents.

She received a standing ovation from Tory MPs, the DUP and the Liberal Democrats.

A few Labour backbench MPs also applauded, but Mr Corbyn did not.